There was no curriculum available that was sufficiently aligned to the new content or practice standards. So in 2012, the SFUSD Math Department began creating a Math Core Curriculum. We worked with many partners, included organizations such as the SERP Institute (Strategic Education Research Partners) and SVMI (the Silicon Valley Mathematics Initiative.)  Two of our key advisors were Phil Daro, one of the lead authors of the Common Core State Standards for Mathematics and Harold Asturias, Director of the Center for Mathematics Excellence and Equity at the Lawrence Hall of Science at the University of California, Berkeley. We also were highly influenced by the work of Oakland Unified School District.
​
These advisors were key in our adopting this unit design, based on rich math tasks, which guides all the SFUSD Math Core curriculum from Pre Kindergarten through Algebra 2 + Precalculus Compression: 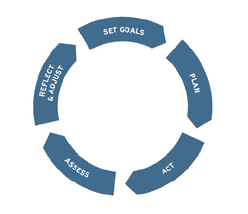 We worked in close collaboration with SFUSD departments such as Multilingual Pathways, Special Education Services, and the Office of Achievement and Assessment on this template, and determined that a math curriculum that put student discourse in the forefront needed to include a commitment to meaningful group work, rich math tasks, and formative assessment to inform instruction.

Along with the units, we developed a Math Teaching Toolkit based on a similar toolkit developed by Oakland Unified School District, that serves as a resource and guidance to support an inquiry-based approached to learning mathematics with an emphasis on classroom discourse. This approach reflects the shifts of pedagogy required to promote the Common Core Standards for Mathematical Practice.

Over the course of 2 years, 120 teachers gathered regularly to study the standards and develop units based on existing materials, as well as the wealth of open-source materials that were being created around the country with the advent of the CCSS. One hundred eighty additional teachers piloted these units and gave feedback.

After 3 more years of iterated cycles of improvement based on feedback, advice from consultants, and the work of teams of teachers, we are thrilled to announce that our K-5 Elementary Math Core Curriculum is being released to the public under a Creative Commons license.​

Because the Secondary Math Core Curriculum includes proprietary sources such as CPM and IMP, full use of the secondary curriculum is restricted to SFUSD teachers and students at this time.